At this time of year, the selection of fresh vegetables starts to get redundant. Soon, we’ll start to grow tired of root vegetables and sturdy greens. But in winter, a raft of exotic fruits appear on store shelves. True, they’re more costly than your average apple or pair but their intense flavors go a long way. Especially if you pair them with the “warming spices,” like the ones in this blackened shrimp recipe, which I created as the appetizer for a whole menu based around cooking with spices.

A flavorful blackened shrimp recipe with a healthy winter salad

For this winter shrimp salad recipe, I’ve spiced up blackened shrimp with cumin, paprika and the aphrodisiacs of cinnamon and cayenne. (Instead of chili powder, my blackening seasoning calls for the distinctive heat of cayenne pepper.) The blend makes it one of the most romantic shrimp dinner recipes, as far as I’m concerned. Did you know that spices can raise your body temperature and help get you in the mood for romance? Yes! If served to the right person, this spicy shrimp recipe with it’s potent shrimp seasoning might help you get lucky.

Just to try to seal the deal, I’ve tossed the blackened shrimp in a salad filled with the bright, tangy flavors and colors of kumquat and pomegranate, another great aphrodisiac ingredient.

RELATED: Discover if your favorite food is an aphrodisiac

What is blackened shrimp?

Blackening is a cooking technique often used for fish and other seafood. It’s a type of cooking associated with Cajun cuisine. It’s supposed to recreate some of the flavor profile of charcoal grilling but on a stovetop.

The ingredients in blackened seasoning

Although I use my spice blend in this recipe to make Cajun blackened prawns, you can use this blackened rub with any seafood. Just follow the technique below using my seasoning for shrimp on whatever seafood you prefer, and adjust cooking times as necessary.

RELATED: Check out more of our seafood recipes.

You can use frozen shrimp for this fast and flavorful, delicious blackened shrimp recipe. However I recommend using fresh seafood whenever possible. But you might decide, after discovering how easy it is to cook these seasoned shrimp that you want to keep a bag of frozen shrimp on hand for a quick, high-protein meal. Just make sure, if your shrimp are not already deveined, to allot a few extra minutes for this essential task.

Why blackened shrimp is traditionally cooked in a cast iron pan

Wondering how to blacken shrimp? Foods with a blackened rub are typically cooked in butter in a hot skillet but can be, as in this recipe. cooked in oil. (Traditionally, blackening occurs in a cast iron pan. It’s the reaction in the pan that develops the signature, dark crust of blackening.)

If you don’t have cast iron, just use your favorite skillet to cook shrimp – just make sure it is large enough that the shrimp don’t crowd in the pan. But if you like this recipe, I recommend investing in a cast iron pan.

How to remove pomegranate seeds without making a mess

A good technique is to cut the fruit into quarters, and pull open in the sink, under running water to prevent splashes. Bend the quarters open to release the seeds. If you don’t want risk the mess, you can just buy packaged pomegranate arils, like POM Wonderful’s POM POMs, which are pomegranate seeds removed from their shell and ready to go.

Just keep in mind that once pomegranate is removed from the skin, the arils go bad very quickly. You’ll need to use them in a day or two of purchase or freeze them to use later.

Try the other recipes in this romantic dinner menu:

I’ve put together a whole menu of recipes featuring warming spices and the magic of winter fruits. Learn more about cooking with spices this winter.

Like the recipe? Get my cookbook, The Seduction Cookbook: Culinary Creations For Lovers 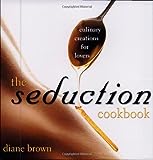 How to Bake with Chocolate
Scroll to top